Whether or not they dazzle in final exams, students are expected to be numerate and literate, preferably at least in two languages (English and Chinese for most youngsters here). They may soon have to add a third language if they are to get ahead in the 21st century: code.

Computer programming, or machine language, code defines much of modern society. It drives all those apps which many rely on everyday to communicate, do business and navigate the world, and policy makers in developed countries have been working on ways to ensure that youngsters speak code.

In Hong Kong, some efforts have begun to instil code literacy. Ray Cheung Chak-chun, an assistant professor at the City University Apps Lab, has been running a series of workshops called “We Can Code”, to teach secondary school students the ins and outs of creating mobile apps. At the same time, British entrepreneur David Greenwood started Code Club HK, a volunteer-run network to promote coding among children aged from nine to 11 at after-school activities.

That is far from adequate if Hong Kong is to realise its dreams of being a tech hub, let alone keep apace with global practices.

“I won’t say Hong Kong is behind the rest of the world. But to become a leader, you need to do more than enough,” says Yat Siu, founder and CEO of web-technology company Outblaze.

Siu knows what he’s talking about. One of Hong Kong’s internet pioneers, he set up the city’s first messaging service more than 15 years ago and has long been an advocate of digital erudition.

“Whether you’re young or not, code is what the world is made of these days. Everything you do, every application you use … almost all are done with some form of coding,” he says.

“Code is not only mathematics and logic, but it’s also a structured language on which things are built,” he says. “So the sooner children know how to code, the sooner they will understand how the world works.”

What Yat wants to do is to enable children to become creators – give them the basic blocks that they can build on, much like how they play with Lego bricks.

When youngsters code they are also picking up logical thinking skills. By constantly coming up with new ideas and translating them into a language readable by machine, he says, it helps us grasp abstract concepts more easily.

“But to me, the biggest foundation is that you learn the language which the world relies on today. For instance, people who understand how code functions are going to be better at searching on Google because a real learner understands how the machine interprets data and gives it back to them.”

Of course, it is not a matter of familiarising young children with programming languages such as Objective-C, the main language used in Apple products. Yat is referring to options such as Scratch, a straightforward, visually driven language created by the Massachusetts Institute of Technology media lab to boost children’s interest in coding.

It is the language that Code Club volunteers have introduced in pilot classes at four schools since March. Greenwood aims to officially roll out the scheme in September, conducting workshops in Cantonese as well as English. By 2016, he hopes they will be established in at least 20 per cent of the city’s primary schools

“We’re focusing on the nine to 11 primary school age group to begin with, as children are more inquisitive in their earlier years. If we get children engaged early enough they can explore the incredible possibilities computer science can offer,” he says.

“If the Hong Kong education system starts lagging in its teaching of computer science, our children will find it hard to compete in a labour market that is becoming ever more globalised.”

The idea isn’t to nurture armies of young people who can master C++ syntax and crank out lines of code (not everyone is cut out to be a programmer, even if there is a shortage of them). What smart cities are seeking is to cultivate its ranks of tech-savvy people who can think computationally – who can envisage new, useful ways of applying programming tools. 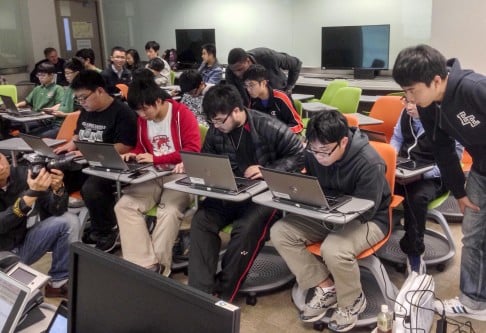 Secondary students at City University’s “We Can Code” workshop.

It certainly calls for multilevel imaginative thinking to conceive of ways, say, of using data from supermarket sales together with weather patterns to decide on what products to stock on the shelves.

An understanding of how code works would certainly reduce miscommunications between businesses and software vendors, a problem that Cheung often encounters.

By far the most common way for companies to create apps today is to outsource.

“But the problem is, when they do it, many of them end up getting a very vendor-driven app,” he says.

This is because many companies lack the most basic knowledge to communicate with their vendors. So even if they spot something wrong, the commissioning person has no clue whether it can be corrected, Cheung says. As a result, clients eventually end up with something very different from what they expected, or get ripped off.

“This is why making coding part of the general education is important,” Cheung says.

Stephen Wan Siu-fung, co-founder of apps developer Bright System, believes that most business professionals need to understand the rudiments of coding if they want to stay competitive. It applies particularly to marketers and project managers, who often have to work on the fringes of the coding scene.

Wan didn’t have IT training and his main job was to keep the books balanced. Still, he learned code, which comes in handy when explaining to clients, for instance, how a new restaurant booking app is designed on a cross-platform framework that can work on both iOS and Android.

Some governments are already introducing education reforms to address such pressing needs. The British education department announced in February that coding lessons would be introduced in every classroom from September, setting aside £500,000 (HK$6.6 million) to provide teachers with special training for the scheme.

Vietnam has embraced early code education, as has Estonia, the country which gave birth to Skype, where it was integrated into the primary curriculum in 2012. In Singapore, officials are also in talks to introduce programming lessons into schools.

Hong Kong needs its own reforms, too, Cheung says.

Students who take computer science for the Hong Kong Diploma of Secondary Education spend only 20 out of the 165 hours in their course learning about coding, using outdated programming language.

“Schools here are spending too much time teaching irrelevant stuff, such as the use of Microsoft Word and Excel”, which many youngsters have picked up in primary school, Cheung says.

“They need to start teaching students how to create their own things by using coding.”

Greenwood concurs. Most IT classes in schools are about how to use Microsoft Office programs, which is basically teaching students to be secretaries.

Educators need to pique children’s interest in coding by making it accessible, and teaching them to think logically and creatively, so more can grow up to become entrepreneurs instead of administrators, he says.

Unfortunately, local schools tend to start programming lessons at an advanced level that puts off many youngsters. So Code Club starts by guiding them to use building blocks of code in fun exercises such as creating simple games of their own.

Yat is a little more optimistic about coding in Hong Kong.

While the US and Britain are ahead of the curve, he says, “I don’t think Hong Kong is behind what’s going on in Asia.”

For example, he hasn’t seen a lot of coding education in Japan, South Korea, or Eastern Europe.

Lam Sai-ming, senior director of the College of Life Science and Technology at HKU SPACE, also reckons changes are happening. At SPACE, Lam has helped spearhead an app-writing course as part of initiatives launched by the Education Bureau last year.

University courses in disciplines outside information technology are also starting to incorporate coding into their curriculum, Cheung says, including a creative media degree offered at City University.

In any case, Greenwood says there is no shortcut to cultivating general understanding awareness of coding.

“We’re getting there,” he says. “It has taken sometime for the UK government to implement mandatory computer science education, and we just don’t expect Hong Kong to change overnight.”